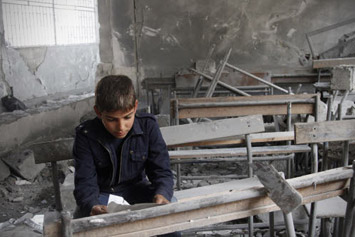 Driven by the desperate situation of Syrian children, Education International has urged the United Nations Human Rights Council to increase the pressure on all parties to the conflict.

In a letter to United Nations (UN) High Commissioner for Human Rights Zeid Ra'ad Al Hussein, Education International (EI) General Secretary emeritus Fred van Leeuwen has condemned the grave violations of human rights in the Syrian conflict, and particularly the gross abuse of children’s rights. On behalf of EI, he expressed deep concern about the indiscriminate and deliberate violence targeting education institutions, students, teachers, academics and all other education personnel.

The letter was sent in advance of the 37th session of the UN Human Rights Council, being convened today, 13 March 2018, to discuss violations of the human rights of children in Syria. The high-level panel discussion will focus on “attacks against children, including attacks on schools and hospitals and denial of humanitarian access.”

“Education is a human right and a public good and schools and universities should be places where teaching and learning can take place in safe environments,” said van Leeuwen.

The high-level panel discussion comes about as reports show that children throughout the Syrian Arab Republic remain disproportionately vulnerable to violence and abuse, and suffer because of attacks against civilians, lack of access to education, and their recruitmentfor use as child soldiers.

Education International recommended that the UN Human Rights Council and the UN member states call on all parties to the conflict to:

• Recognise and respect the right of all children and adults to a safe education in a peaceful learning environment, and to respect education institutions as safe sanctuaries

• Immediately cease all forms of attacks and abuses against education institutions, students, teachers, academics, and all other education personnel

• Take all possible measures to protect students, teachers, academics and all other education personnel from all deliberate attacks on their way to or from, or at their places of learning or work

• Take all possible measures to ensure the access to education to all children affected by the Syrian conflict, including refugee and displaced children within Syria and in neighbouring countries

• Ensure that the victims of attacks against education institutions benefit from all the assistance they need, including access to medical and humanitarian aid

The global union federation further called on the UN Human Rights Council and the UN member states to: assist in monitoring and reporting of attacks on education institutions, assist in ending impunity, increase diplomatic efforts to bring the conflict to an immediate end, and support all efforts towards the full recovery of the education system in Syria.

Education International also encouraged all governments parties to the conflict to sign up to and endorse the international Guidelines for Protecting Schools and Universities from Military Use during Armed Conflict.

Among numerous alarming international reports on the impact of the conflict in Syria, the 2017’s UNICEF Report stresses that children’s exclusion from education remains a serious problem, with an estimated 1.75 million school-aged children in Syria and over 40 per cent of Syrian refugee children remaining out of school. In 2017, the UN verified 2,909 grave violations against children (including 119 attacks on hospitals and 89 attacks on schools).

The conflict in Syria continues to take a devastating toll on children and on education in 2018: hundreds of children have been killed and thousands are deprived of the right to education, dozens of schools have been destroyed or damaged, and the education system is heavily disrupted. In the first months of this year, the intense combats in the regions of Afrin, Idleb, and Eastern Ghouta have targeted civilians and civil infrastructure indiscriminately. The denial of humanitarian and medical help in the conflict zones further worsen the suffering of children and civilian.

In Eastern Ghouta and Afrin regions, children and students have no access to their schools and universities as education activities are currently suspended due to the prevalence of shelling and airstrikes. According to reports, in the region of Afrin alone, 311 schools, including 261 primary schools and 50 secondary and higher education institutions, are closed; 31 schools have been heavily damaged or destroyed; 2,327 teachers have been forced to stop teaching, leaving 65,000 children deprived of an education; and 250 university students and 136 lecturers have no access to their university.

#UDHR70 - "In Burundi the union is standing firm in its struggle for teachers’ rights", by Rémy Nsengiyumva.