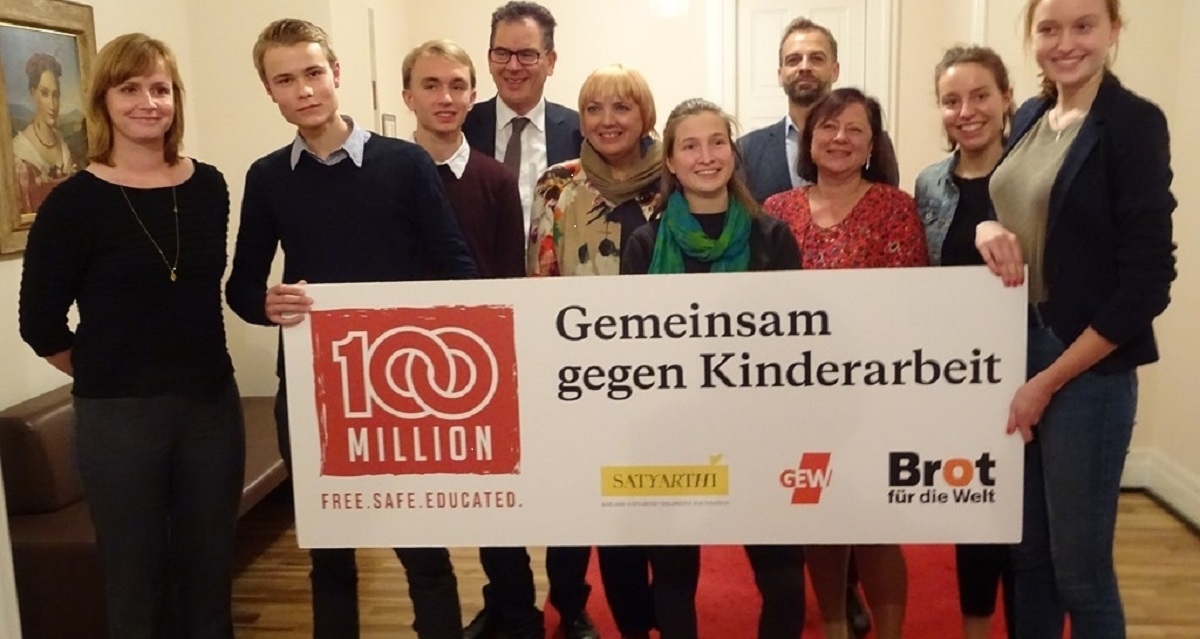 German students and politicians met with activists and education unionists from Gewerkschaft Erziehung und Wissenschaft and debated ways to fight the scourge of child labour in the framework of the 100 Million campaign.

This event is part of GEW activities against child labour, including their financial support to EI projects aiming to eradicate child labour through their Fair Childhood Foundation.

The GEW met on 7 November in Berlin with young people and Federal Minister for Economic Cooperation and Development Gerd Müller, as well as MPs of all political parties represented in the German Parliament, the Bundestag, except for the far right-wing party afD.

Müller explicitly welcomed young people’s demands calling for the respect of children's rights and an end to child labour: “I think it is right that young people raise their voices”.

Stressing that it is time to think about taking legislative steps, he recalled the experience of the textile alliance for good working conditions in the global garment industry, which he had initiated, which showed that good will alone is not sufficient. Müller therefore proposed to the Bundestag members present a trans-party petition on child labour.

A “free, safe and educated” future for all children

Bundestag Vice-President and Greens MP Claudia Roth referred to the over seventy million people fleeing their homes around the world, including many children who cannot go to school. She supported the 100 million campaign’s demands for a future that must be “free, safe and educated” for all children. “There is a connection between poverty and child labour, poverty reduction and the implementation of the UN Convention on the Rights of the Child are important tools to overcome child labour,” she insisted.

Free Democratic Party (FDP) MP and chairman of the Bundestag’s Human Rights Committee Gyde Jensen underlined the importance of children's rights and proposed a session dedicated to the issue in the Bundestag. Instead of new laws to hold corporations accountable for violations of human rights, she called for a system of positive incentives to promote corporate human rights responsibilities.

“Why are there no legal obligations so far, while all are united in their condemnation of child labour?” asked Foreign policy spokesman for the Linksfraktion’s parliamentary group (far left) in the Bundestag Stefan Liebich. According to him, this is due to interests about which one must speak openly: “Child labour earns money. If you want to change things here, you have to be willing to invest in companies that profit from the exploitation of children.”

The 100 million campaign advocates that all children and young people should grow up in freedom and security and attend school. The campaign will promote these demands between 12-18 November during a global action week in numerous countries.

School and action materials in several languages on the award-winning documentary “The Price of Free” are also available. The film tells stories of children that Kailash Satyarthi has freed from exploitative labour. It was made available free of charge to schools, universities and youth associations on 14 November as part of the Global Week of Action.

Satyarthi will visit Berlin at the end of November and meet with German Chancellor Angela Merkel on the 27th.

More information (in German) is available on the GEW website.