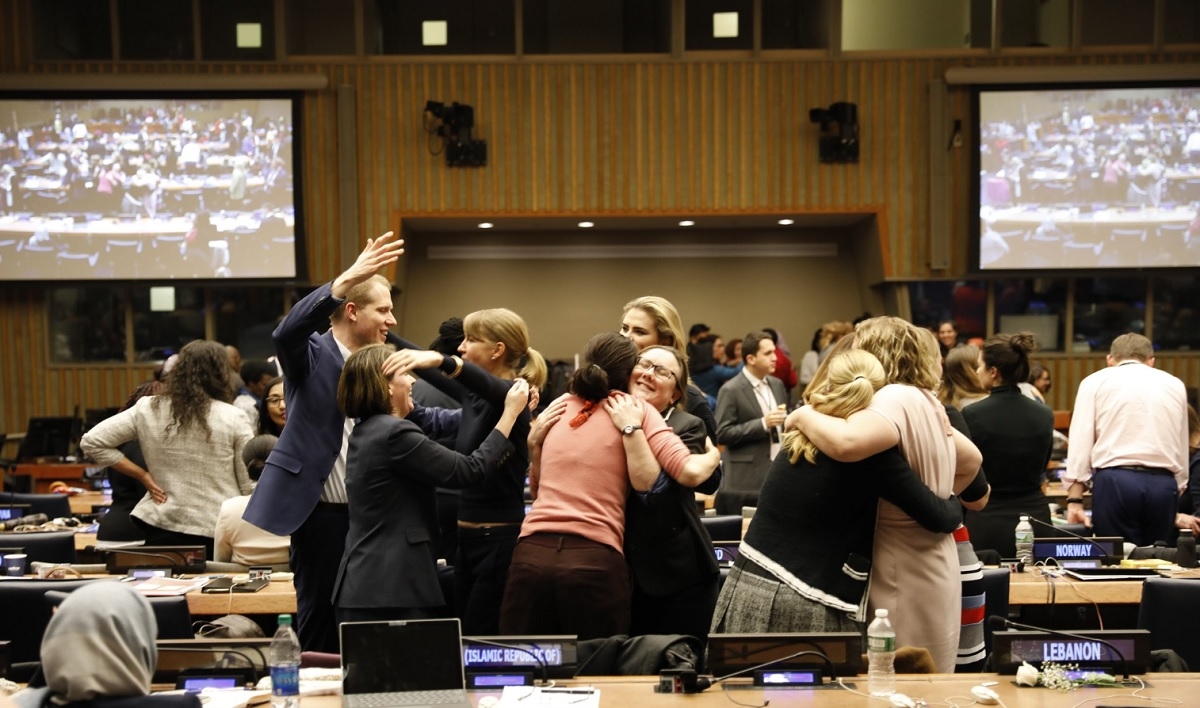 Delegates rejoicing over the adoption of the UNCSW63 Agreed Conclusions. 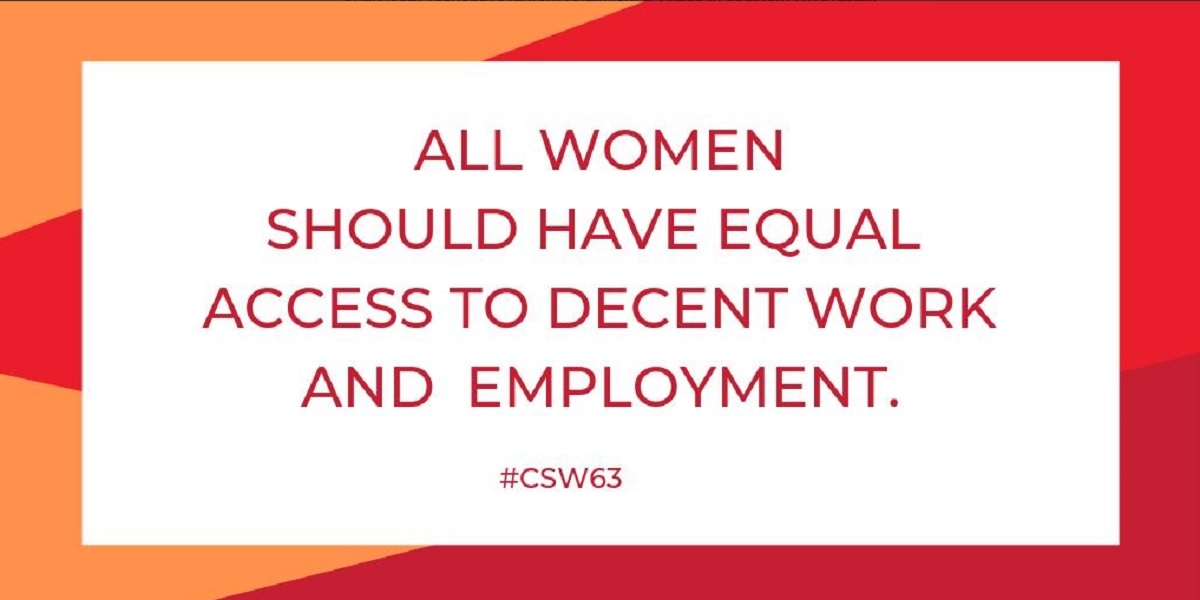 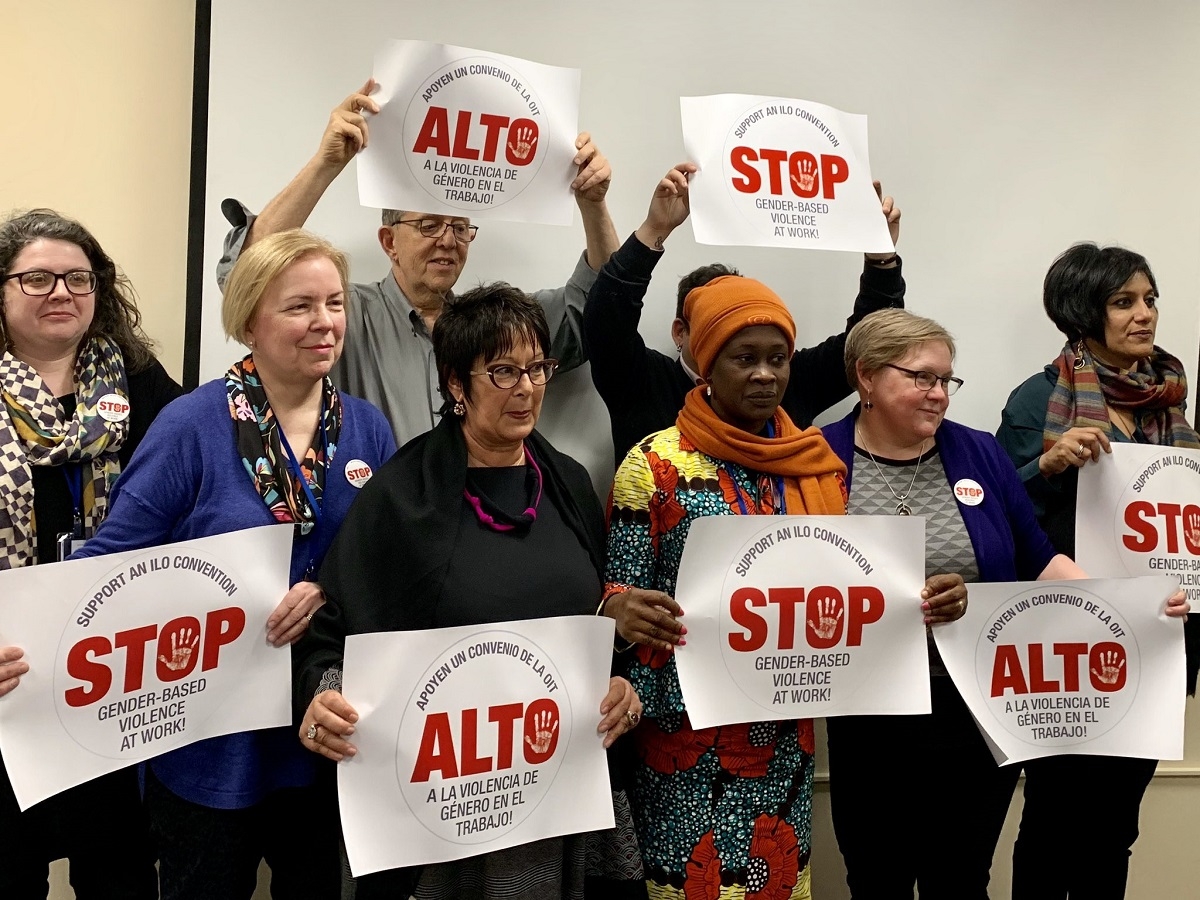 Women unionists at UNCSW63 supporting an ILO Convention on gender-based violence in the world of work. 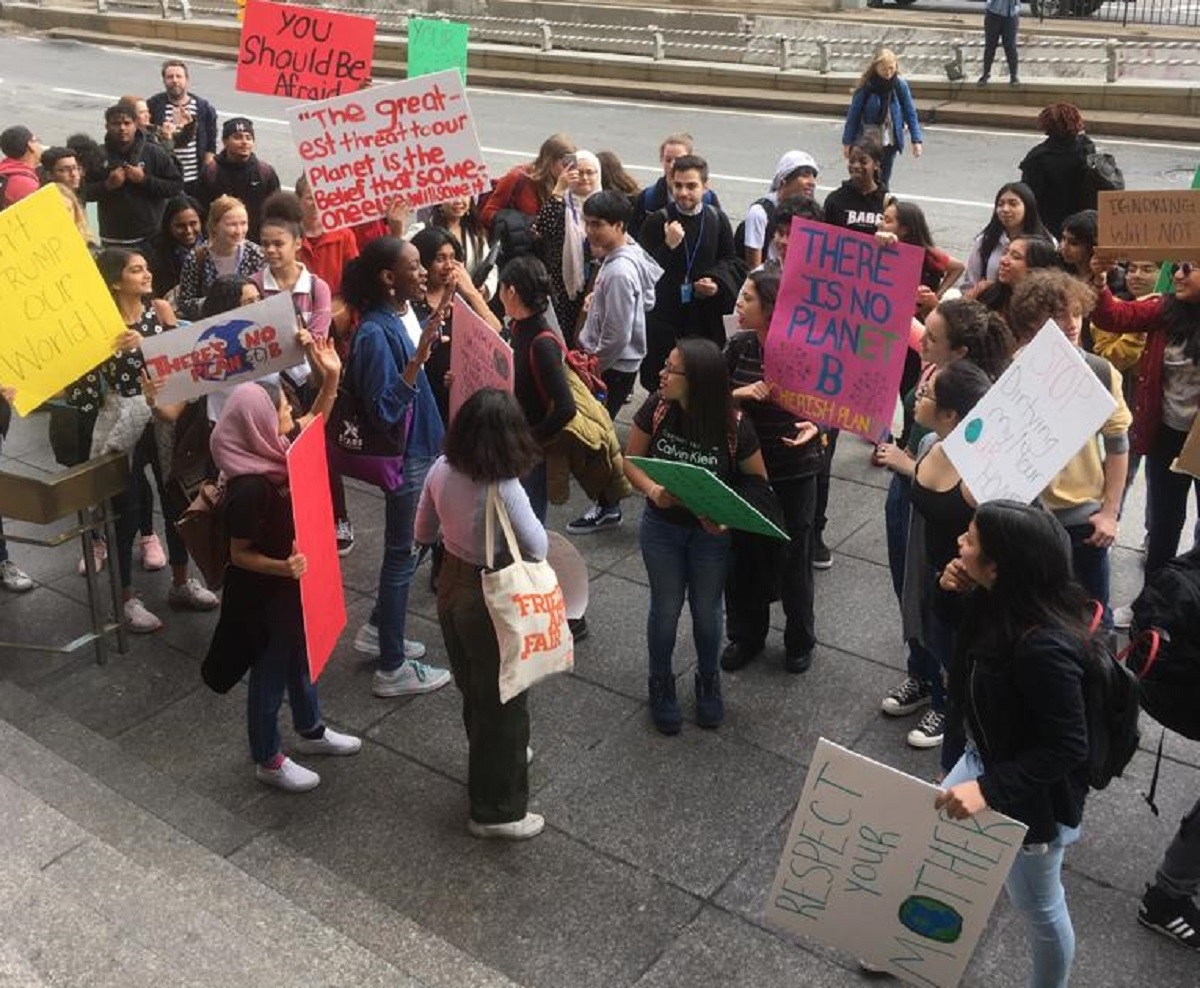 The women workers' delegation joining young people who took to the street in NYC to march and rally for climate justice. 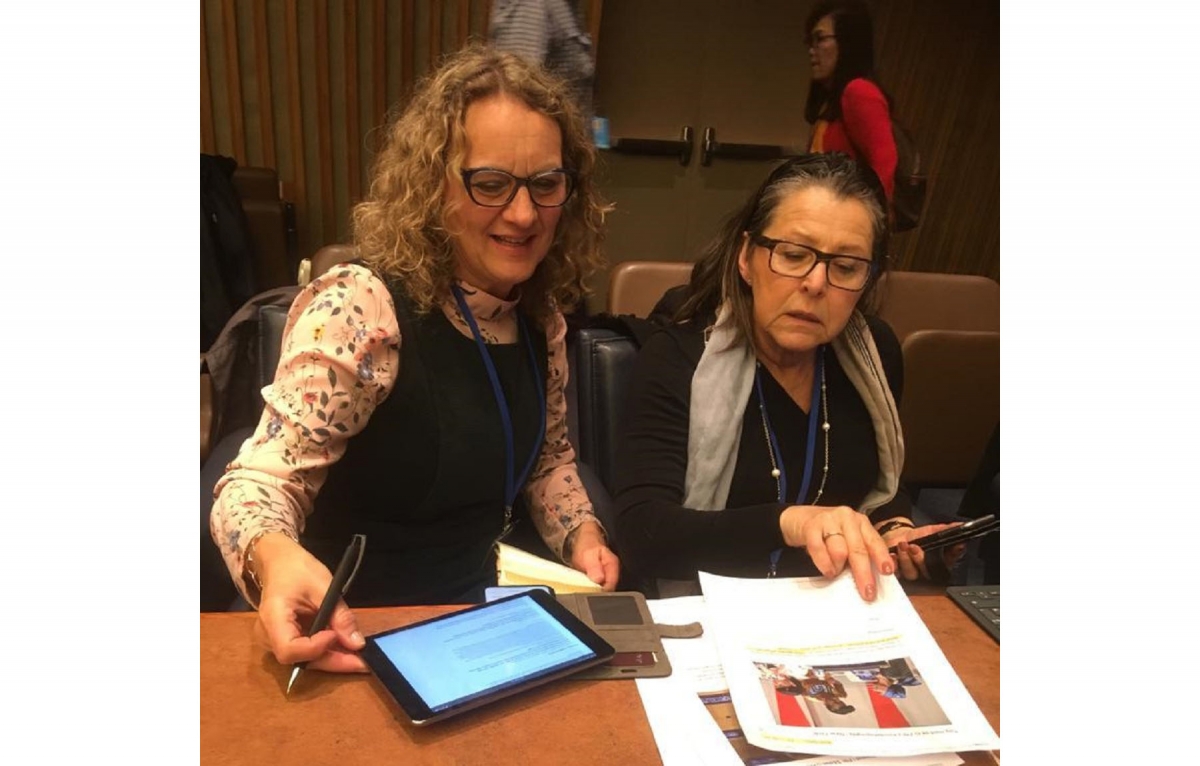 Members of the women unionists' delegation at work during UNCSW63.

The women workers’ delegation, including education unionists, welcomes the Agreed Conclusions of the 63rd session of the Commission on the Status of Women, which includes positive language on education and social protection systems.

Key gains on gender and education

The Agreed Conclusions of the 63rd session of the Commission on the Status of Women (UNCSW63), reached on 22 March, have borne satisfying results concerning gender and education:

Educational spaces are specifically mentioned among the list of key sites that require action and attention on sexual harassment. There is a specific mention of early childhood education as “crucial in enabling women to enter and remain in the labour market”.  The wide ranging, multi-layered and most pernicious gender-based barriers to the right to education for girls are also highlighted.

There is explicit reference to the multiple and intersecting forms of discrimination faced by disabled women and girls, and indigenous women and girls (including in relation to education), especially for those living in rural areas.

Governments are urged to “adopt national gender-responsive migration policies and legislation, in line with relevant obligations under international law, to protect the human rights of all migrant women and girls, regardless of migration status, and to recognise their skills and education”.

A key gain for women in education is the call on governments to eliminate occupational segregation by addressing “structural barriers, gender stereotypes and negative social norms, promoting women’s equal access to and participation in labour markets and in education and training, supporting women so as to diversify their educational and occupational choices in emerging fields and growing economic sectors, such as science, technology, engineering and mathematics and information and communications technology, recognising the value of sectors that have large numbers of women workers”.

A key paragraph in the document calls for investment in public education systems and infrastructure, free and compulsory primary and secondary education and the promotion of lifelong learning opportunities for all. It also stipulates that governments should “address negative social norms and gender stereotypes in education systems, including in curricula and teaching methodologies, that devalue girls’ education and prevent women and girls from having access to, completing and continuing their education”.

Another important explicit reference is made to pregnant adolescents and adolescent mothers and single mothers, with a call for governments to adopt policies that would facilitate their successful return to, and completion of, education.

The women unionists’ delegation also successfully lobbied for the inclusion of progressive languageconcerning social protection systems and access to public services and sustainable infrastructure. These included: references to the importance of International Labour Organisation (ILO) standards and the decent work agenda; measures to strengthen protections for informal economy workers and promote their formalisation; ensuring that unpaid care work is valued in contributory schemes; guaranteeing access to paid maternity, paternity and parental leave; promoting shared responsibility of care between parents; and acknowledgement that universal access to social protection plays a central role in reducing inequality, as well as emphasis on the need to make progress towards universal health care.

The women workers’ delegation, including the EI delegation, will, however, still have to continue efforts for specific reference to, and inclusion of, LGBTIQ+ women and girls in the UNCSW outcome document in 2020.

Some demands were also not met, such as references to survivors’ benefits, stronger language around the ratification of ILO Conventions,  and an emphasis on the need for contributory and non-contributory social protection systems

Despite significant gains, challenges remain to realise the full human rights of women, in all their diversity, as the press release from the women’s rights caucus at UNCSW stressed. Of significant concern was the removal of service provisions for survivors of violence—a development that is out of step with the growing awareness and action to reduce and eliminate the prevalence and consequences of gender-based violence against women. Member States also failed to commit to integrating sexual orientation, gender identity, and expression into the design of social protection, public services, and infrastructure systems. The Agreed Conclusions also demonstrated the unwillingness of governments to regulate and hold the private sector accountable for its responsibility to uphold women’s human rights.

At this crucial moment, UNCSW must continue to involve the vital voices of civil society in their deliberations and strengthen the potential of these negotiations to continue the practice of consensus-based advancement of women’s human rights.

A critical occurrence at the end of the first week of UNCSW63 was the thousands, if not millions, of young people across the world who took to the street to march and rally for climate justice, including outside the United Nations Headquarters in New York. The labour delegation at UNCSW63 marched in solidarity with the students.