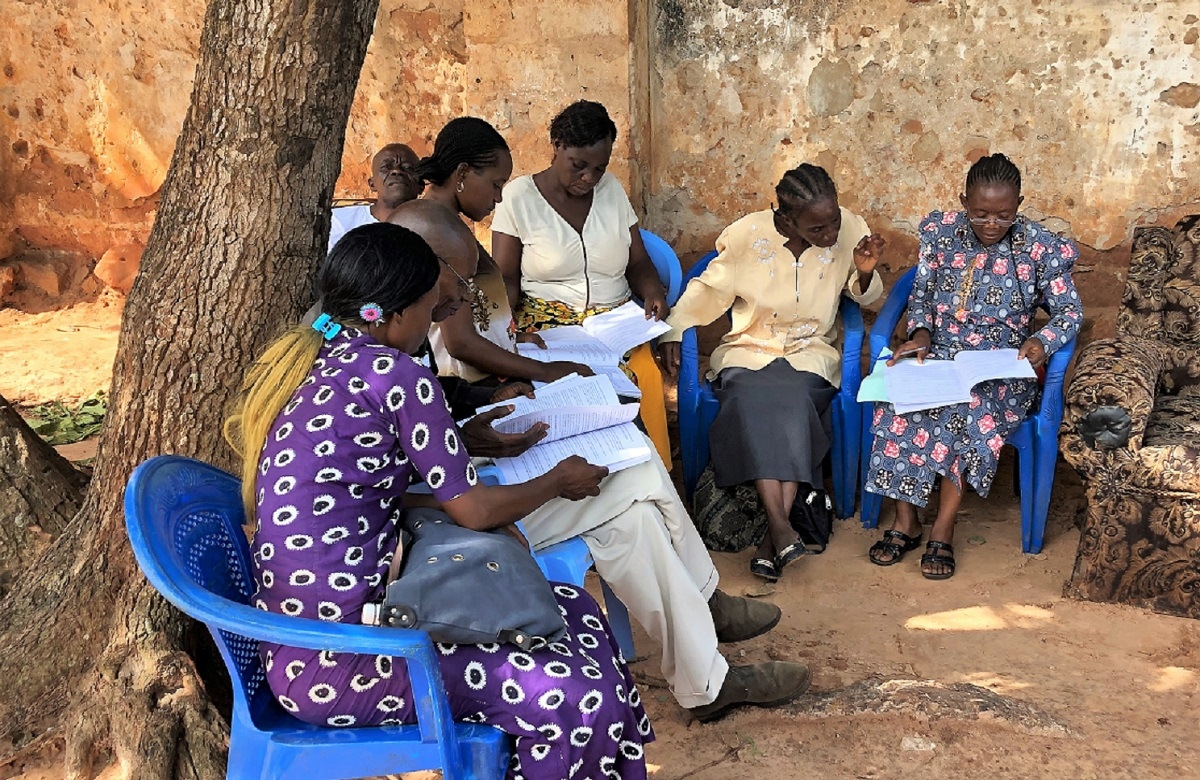 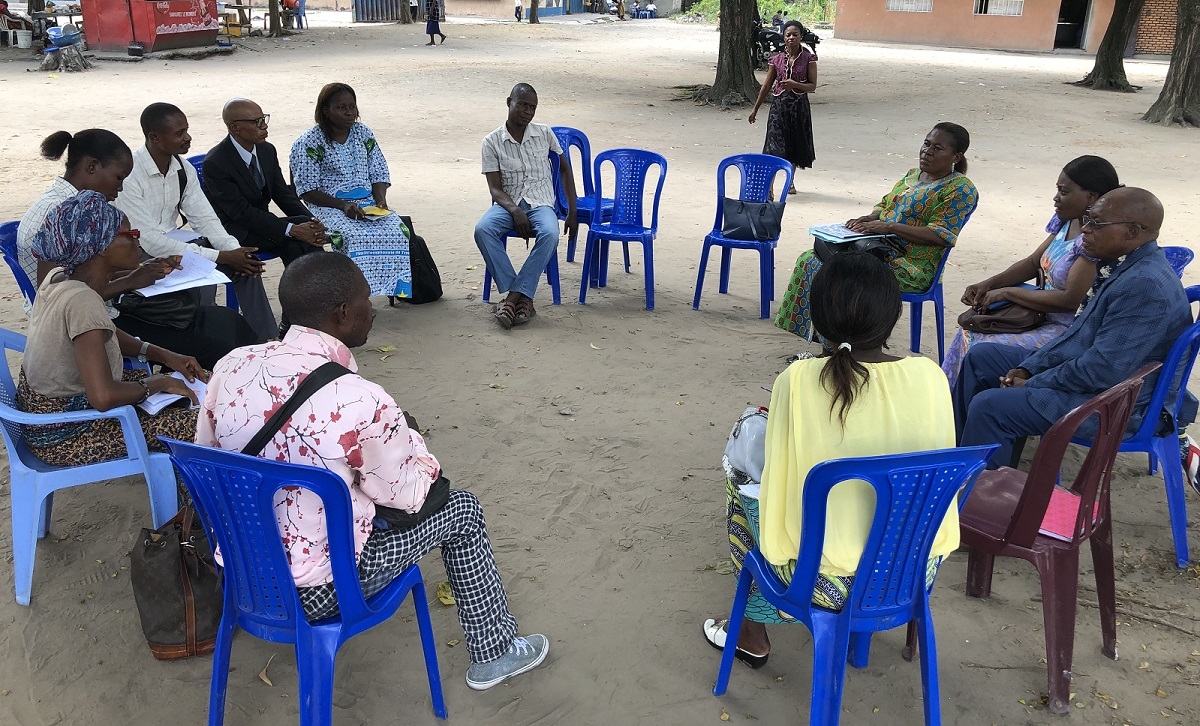 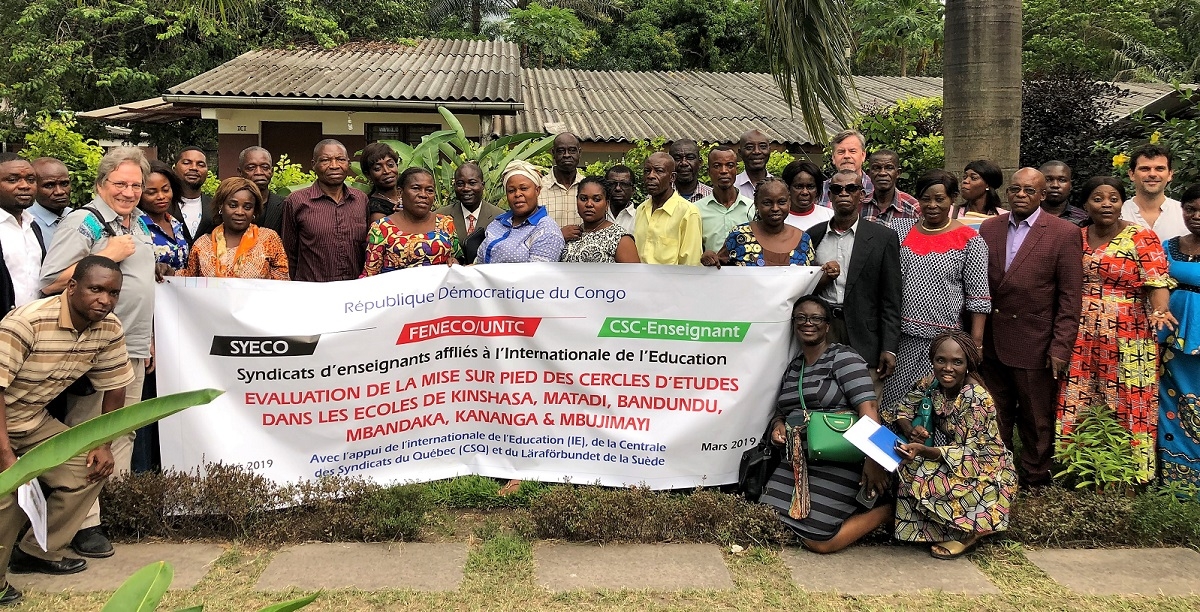 Education unions affiliated with Education International in the Democratic Republic of Congo have been evaluating the use of study circles to improve the quality of education and promote trade unionism in schools.

After the programme had been running for one year, Education International (EI) and its member organisations in the Democratic Republic of Congo (DRC), the Centrale de l’Education Nationale et de la Recherche Scientifique (CSC-Enseignement), the Fédération nationale des enseignants du Congo and the Syndicat des Enseignants du Congo (SYECO), carried out an initial evaluation. The scheme is designed to promote trade union unity and is jointly financed by the Centrale des syndicats du Québec (CSQ)/Canada, Lärarförbundet/Sweden and EI. The programme is based on study circles and aims to introduce a culture of dialogue into the workplace to deal with problems in the teaching profession, a concept that has been tried on every continent. In Africa it is called PanAf (the Pan-African Programme) and is made up of trade union organisations from 18 French-speaking and English-speaking countries.

Between March 18 and March 24, a one-day workshop was held to evaluate the scheme in three of the six regions, Kinshasa, Matadi and Mbuji-Mayi. In these three regions, the 30 facilitators met to carry out a detailed assessment of the difficulties encountered, requirements, suggestions for tackling problems, and so on.

The aim of the programme, introduced in March 2017, was to train the trainers. It was deployed throughout the regions in two stages: in 2018, in the first three regions, then the remaining three. In each region, 30 schools were targeted and in each school a facilitator, a union member, followed a five day training course, based on a manual.

Among the positive aspects of the study-circle approach, a participant in a women's study group acknowledged that, "for the first time, I was able to have my say in Church".

A participant in another study circle said that, "it has improved the relationship between teachers. It has made it possible for us to get to know each other and to get to know ourselves better too".

In fact, where there was little or no team work in schools before; this programme has improved working relationships, reduced conflict between teachers and between teachers and school managers. There have been improvements in other areas too, for example, in staff meetings and in the classroom.

The study circles have led to a very welcome culture of dialogue and promoted the spread of trade unionism. In study circles, teachers can discuss the problems they face and work out solutions for them. This is similar to the African tradition of the meeting places known as “meeting trees”, and with the origins of the trade union movement; let’s get together and rely on our own resources.

Among the main problems reported by the facilitators was the fact that some heads of institutions were afraid of the unions and wary of this new type of assembly. There was practically no union life in some schools before as officials refused to let the teachers get together at all. Through dialogue and meetings with union officials, some of these restrictions have been lifted, but not all.

A method based on a manual

Study circles are organised around a manual that is divided into two sections.

The first section describes the method itself, which adopts a disciplined approach and serves primarily to instil a culture of respect for the opinions of other people, to encourage them to listen to all sides of the argument, to organise meetings with a specific agenda, to meet once a week or once a month, to limit the number of participants to 13, etc.

A measure of flexibility is necessary. The evaluation carried out by EI, CSQ and Lärarförbundet showed a need for such flexibility in order to adapt to the local situation, for example, by increasing the number of participants so that people do not feel excluded.

The second part of the manual consists of information specific to education, the education system, the status of teaching staff, etc. With two unions out of three already having their own union guidebook, these have been merged into one to produce the second section of the manual.

It is also important to distinguish between local problems and national problems.

Local issues include a lack of teaching materials in schools, defective toilets, and conflicts between teachers and parents or management. These types of problems can be tackled locally through dialogue.

Issues can be both local and national and call for solutions at several levels, such as "taking responsibility", which, in reality, means that, even in the country’s public schools, parents have to pay for schooling, otherwise their child will be excluded, a course of action normally associated with the private sector. In fact, because some public school teachers may not be paid at all, parents pay their salaries directly, in what is euphemistically known as "teacher motivation".

When the issues are at a national level, union intervention is clearly essential.

One of the objectives of the evaluation was to find out if the number of dues-paying members had increased, which turned out to be the case. The unions must be strengthened by encouraging the regular payment of union fees. This would then result in improved trade union solidarity and would encourage grassroots unionism in the workplace.

With the seeds of trade unionism having been sown in 30 schools, region by region, the challenge is now to expand this activity even further. Facilitators should set up study circles in schools close to their own and leave them to run autonomously after a certain number of sessions.

It is also important that the study circles do not remain isolated and are eventually networked in order to share their positive and negative experiences.

This is all the more crucial as the DRC is a huge country. Travel is almost impossible and virtually no province is accessible by road. In addition, the level of poverty in the regions is high and there are frequent power cuts, so access to the Internet is very limited. Exchanging information by email or WhatsApp is almost impossible, due to the lack of an adequate telephone network, and study group meetings are usually organised over the phone.

"Notwithstanding the challenging environment, EI member union officials in the DRC are demonstrating a high level of commitment and are fighting for the interests of education workers and the success of the study circle scheme", said EI General Secretary, David Edwards.