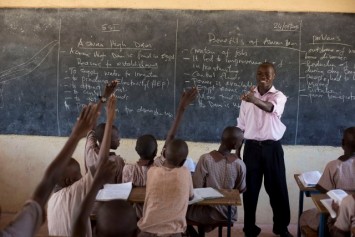 After a long and devastating conflict in which trade union rights were violated and the existence of the Kenya National Union of Teachers (KNUT) was threatened, the Education Committee of the Parliament of Kenya has proposed a series of steps to resolve the dispute. The proposal is aimed at reversing several of the measures taken by the Teachers’ Service Commission (TSC) and resolving remaining issues through negotiations.

The most recent collective agreement between the KNUT and the TSC was negotiated in 2017 and expired in May of 2019. At that time, the Knut, an EI member organisation, represented over 200,000 public-school teachers. At the end of that agreement, the TSC put pressure on members to quit the union.
The TSC campaign against the union included establishing two parallel payrolls in the Public Teaching Service. Under this double payroll system non-KNUT members are paid enhanced salaries and allowances. This discrimination ran counter to the nation’s laws, court orders, and ILO international labour standards. Members also suffered discrimination in promotions and upgrades through unilateral TSC changes in regulations without legislative approval.
Recently, the Parliament has directed the Teachers Service Commission (TSC) to reinstate 130,000 teachers removed from the teachers’ union register by end of this month and to transfer money owed to the union. It also proposed eliminating discrimination in promotions against KNUT members and remedying past injustices. A collective agreement that runs into 2021 which had excluded KNUT members, should be applied equally to all teachers regardless of union membership.
The Parliament called on the KNUT and the TSC to “cease hostilities”, drop court cases and resolve differences through negotiations as was done until 2016.
KNUT Secretary General Wilson Sossion affirmed "The social and political rights of teachers should not be threatened by undemocratic employers. Efforts to obliterate a union and deliberate exclusion of members from a CBA is not only illegal but a very immoral act of discrimination'.
Sossion, in reacting to the decision, said, “the recommendations of parliament prove clearly that KNUT was right, and we shall support the recommendations of the house.”
The Committee proposed a sub-committee to reconcile the TSC and Knut. If the TSC ignores the Committee, it will review its options, including possible budgetary measures.
Commenting of the action by the Kenya Parliament, EI General Secretary David Edwards, said, “We welcome the decision of the Education Committee of the Kenyan Parliament. It is, however, essential that it be fully implemented and that good industrial relations in the interest of all parties, education, and the public good be restored and strengthened. EI will continue to monitor the situation and stand in solidarity with its member organisations and the educators of Kenya.”