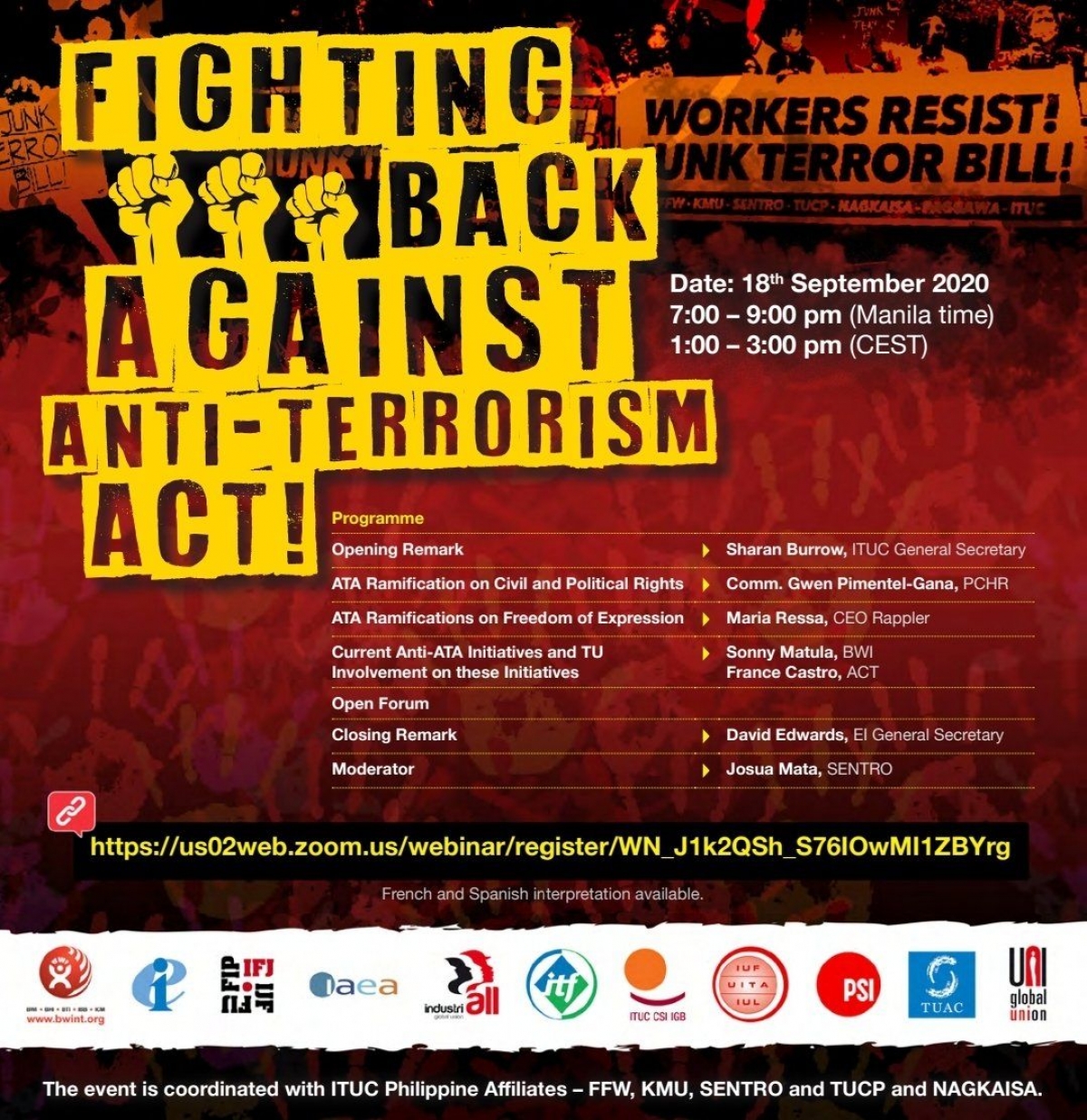 Education International has joined other Global Unions in a webinar backing Filipino workers and trade unionists who fight to defend from governmental siege rights and democracy. The discussion was organised by the Council of Global Unions (CGU). The CGU groups Global Union Federations like EI with the International Trade Union Confederation (ITUC) and the Trade Union Advisory Committee to the OECD (TUAC).

The event brought together trade union leaders from Global Unions and the Philippines with other defenders of human rights.  Participants described the dangers to democracy under President Duterte. They focused on the recently adopted Anti-Terrorism Act (ATA); legislation that is so vague that it can be used to repress and terrorise trade unionists, journalists, and anybody who opposes the Government.
Anti-Terror Law
“This is a timely and relevant webinar for us in the Philippines, as we Filipinos are fighting on all fronts the Anti-Terror Law, in the street, in the courts, in the Congress,” said France Castro, former General Secretary of the Alliance of Concerned Teachers - Education International’s affiliate in the Philippines- and a member of the national parliament.
On 1 September, a broad coalition of education actors in the Philippines filed a petition against the 2020 ATA in the national Supreme Court. It is one of 35 petitions against the ATA, which, in effect, criminalises activities and speech protected by the country’s constitution.
She insisted that ATA is “a licence for violation of rights to free speech, due process, peaceful assembly, and protection against torture”.
“It is a war of the government against its people”, she deplored,” insisting that the attitude of the resistance to the current administration is “fear not and struggle on”.
Freedom of the Press
Participants to the webinar highlighted that freedom of the press was under attack. They underlined the case of Rappler’s top Filipino journalist, Maria Ressa, who is targeted by public authorities. Ressa is facing up to six years in prison after she was found guilty of “cyberlibel” charges. The refusal by the authorities to renew the franchise of ABS-CBN, the country’s largest media group, was also cited.
Trade union leadership on democracy
Concluding the webinar, Education International’s General Secretary David Edwards stressed that particularly “in times of COVID-19, it is necessary to show solidarity”. He added that “authoritarianism uses crises to increase its power; and fear to silence its opposition”.
He went on to say that the trade union movement is “in a unique position to defend democracy, to stand with brothers and sisters in the Philippines, and solemnly condemn the current situation”. Edwards emphasised that “these are not theoretical moments. Trade unionists are the last ones standing between democracy and freedom, and martial law and dictature.”
European Union Generalised Scheme of Preferences (GSP) and the Philippines
The European Union (EU) provides for advantageous trade treatment for developing countries under its Generalised Scheme of Preferences (GSP) to help alleviate poverty and create jobs based on international values and principles.
GSP+, one of three GSP programmes, is a special incentive programme that slashes tariffs to zero per cent on imports into the EU based on implementation of 27 international conventions on human rights, including worker rights, protection of the environment, and good governance.
The Philippines and GSP+
The Philippines was provided GSP+ status in 2014. An EU staff working document covering 2018 and 2019 reflects the deterioration since the election of President Duterte in 2016. It considers transparency, governance, violence, freedom of expression and a range of human rights, including trade union and other worker rights.
If rights are not respected, trade advantages may be suspended or eliminated by the European Commission. That was the case on 12 August of this year for Cambodia, under “Everything But Arms”, another GSP programme. The action denied duty-free access to the EU market for several important imports. The basis of the measures was primarily the violation of trade union rights, including a ban on union organisation by teachers and other public sector workers.
Action by the European Parliament
On 17 September, the European Parliament adopted a resolution on the situation in the Philippines. It states that despite “major backsliding in the country’s human rights record, the EU has so far not triggered the mechanism that could lead to the suspension of these trade benefits.”
The European Trade Union Confederation (ETUC), working with the international trade union movement, especially the ITUC, is very active on GSP country cases. They will be working on the Philippines as they did on many previous countries, including Cambodia.
CGU Statement
On 18 September, the Council of Global Unions (CGU) adopted a statement on the European Parliament resolution. It concludes:
“The CGU is encouraged by the action of the European Parliament and supports moves to invoke the mechanism of the European Commission to examine the suspension of GSP+ benefits. This action is good news for the people of the Philippines and for all who fight for human rights and democracy. We hope that this resolution will accelerate a better, more decent future when the Philippines can be welcomed back to the ranks of democratic nations.”