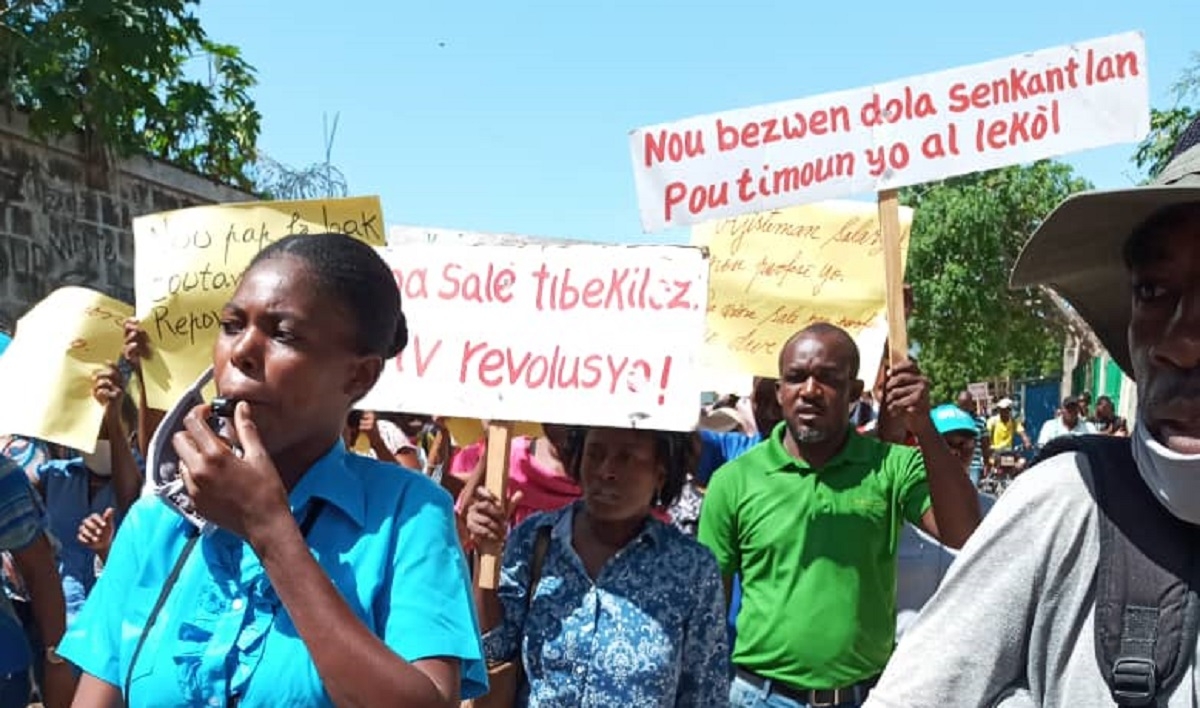 Education International and its member organisations are monitoring the situation for teacher trade unionists fighting for free, quality public education for all in Haiti. In particular, they are putting pressure on the government to respect the human and trade union rights of educators

On 30 September, Education International, together with its national affiliates, the Konfederasyon Nasyonal Anseyan Dayiti (CNEH), the Union nationale des normaliens d'Haïti (UNNOH) and the Union Nationale des normaliens et normaliennes et éducateurs et éducatrices d'Haïti (UNNOEH), lodged a complaint with the International Labour Organisation's Committee of Experts on the violation of trade union rights .
Repression against active teacher trade unionists
This complaint follows a series of actions in support of teacher trade unionists belonging to the CNEH, UNNOH and UNNOEH, whose trade union rights have been under attack since August. On 11 August, the Haitian Ministry of Education sent a transfer letter to Magalie Georges, Secretary General of the CNEH, and Georges Wilbert Franck, UNNOEH Coordinator.
These transfers were handed down without any justification. According to the unions concerned by these measures, they are a consequence of their continuous mobilisation, over the past several months, for free and quality public education on the one hand, and a revaluation of the status of teachers on the other.
Should the transfers be carried out, they would force Magalie Georges to work in a neighbourhood located 10 kilometres away from the centre of Port-au-Prince, and Georges Wilbert Franck to move 150 kilometres away from the capital. This would prevent the two trade union leaders from exercising their duties, and would deprive them of premises in which to hold trade union meetings.
As soon as this announcement was made, national affiliates of Education International, the CNEH, UNNOH and UNNOEH, decided to organise demonstrations and strikes with several other unions that are not affiliated to EI.
International mobilisation in solidarity
As soon as it became aware of this, Education International wrote to the Haitian authorities requesting the cancellation of the transfer measures ordered against Magalie Georges, Secretary General of CNEH and Georges Wilbert Franck, UNNOEH Coordinator, and the reinstatement of the wages of Josué Mérilien, UNNOEH Coordinator. His wages have been suspended since 2017.
Education International will provide material support to its affiliates in order to support mobilisation efforts throughout the country.
From mid-August to 25 September, the start of the holidays, the strike extended throughout the country in public schools. Representatives of CNEH, UNNOH and UNNOEH toured several regions to inform and mobilise. Tensions were observed between public and private school students. While most public schools were on strike, private schools (about 80% in Haiti) continued to operate.
On 10 September, the public prosecutor's office in Port-au-Prince issued a warrant to bring in Josué Mérilien for "attempted murder". This preposterous accusation is a cover for union busting. It was unanimously condemned by the education unions. On the same day, the Minister of Education wrote to each trade union organisation to propose a meeting.
The striking union organisations, including CNEH, UNNOH and UNNOEH, replied to the Minister stating that they refused to engage in dialogue until the anti-union measures were lifted.
All the other trade union organisations, including the National Federation of Education and Culture Workers (FENATEC - Fédération nationale des travailleurs en éducation et en culture), also affiliated to Education International, declined the Minister's invitation in solidarity with the activists who were victims of anti-union measures.
It should be pointed out that since taking office in 2017, the current Minister of Education has never organised a social dialogue session with trade unions, despite the fact that the unions have long since submitted their demands.
Appeal to United Nations’ bodies
After the United Nations Integrated Office in Haiti (BINUH) issued a press release on 16 September entitled ”UN concerned about the impact of the security situation on the continuity of education in Haiti” (in French), the striking unions wrote to BINUH the next day welcoming the press release.
CNEH, UNNOH and UNNOEH lodged a joint complaint relating to violations of trade union rights with the UN Special Rapporteur on the Right to Education, Koumbou Boly Barry.
In addition, to date, more than 50 letters of protest from more than 30 countries have been sent to the Haitian authorities by Education International affiliates asking them to reverse their decisions to transfer and arrest trade union leaders.
Education International will continue to support its Haitian affiliates in their efforts to have the anti-union measures reversed.