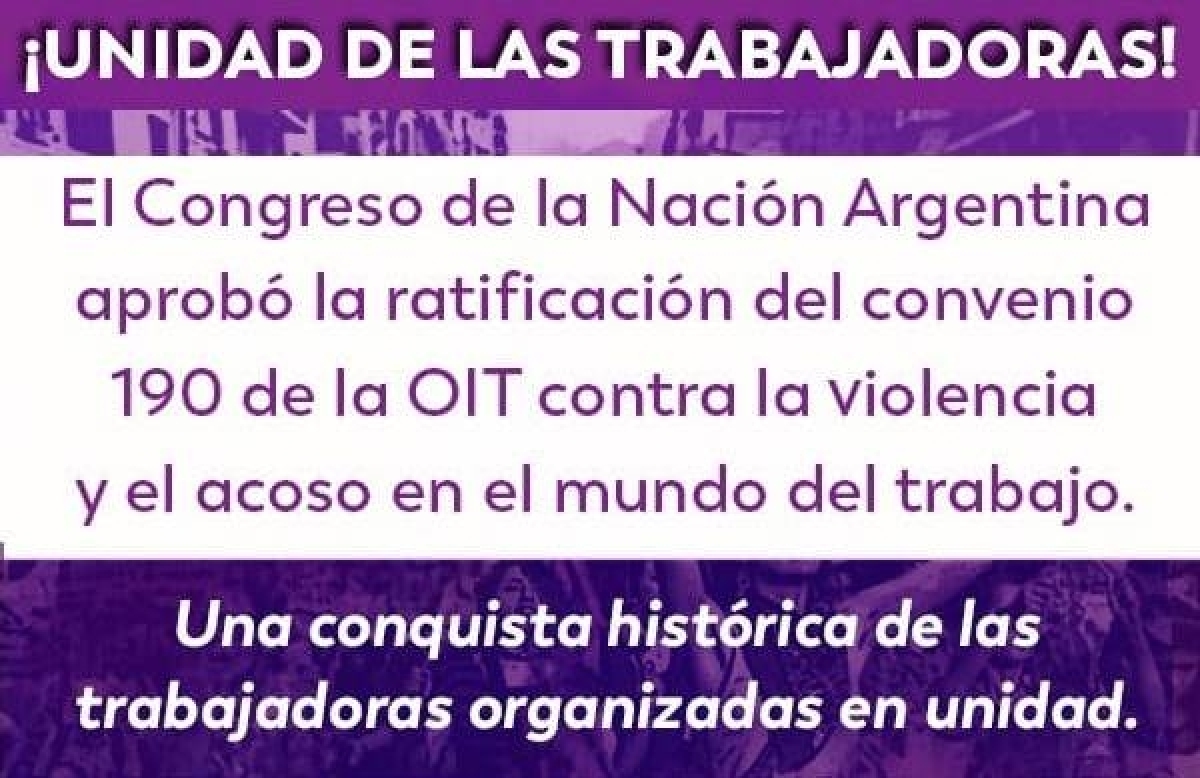 The country is the third in the world to adopt ILO Convention 190 against violence and harassment in the world of work.

The Argentine National Congress has ratified ILO Convention 190 (C190) against Violence and Harassment in the World of Work. This is the first international standard that seeks to end violence and harassment in the workplace and that makes clear that all workers have the right to a working life free from violence and harassment.
Although the Convention covers men and women, women are, disproportionately, victims of harassment and violence on the job. It applies to direct employees, but also to those who do not have an employment relationship as well as third parties, who may engage in harassment and violence of workers.
President Alberto Fernández pledged to adopt the convention at the opening of the congressional session. According to the Argentine government's official website, the agreement "applies to all workers, regardless of their contractual status, but it also recognizes that women are the most exposed to violence and workplace harassment.
Once ratified, Argentina will have to adapt its legislation to comply with the contents of the convention. The many provisions of the Convention will need to be placed in legislation, including measures for prevention and dealing with violence and harassment in the workplace.
A Landmark Victory for Organised Women Workers Acting in Unity
Sonia Alesso, General Secretary of member organisation CTERA, who is a member of the EI Executive Board stated that the adoption of the agreement was "a landmark victory for organised women workers acting in unity".
This is also the opinion of Pedro Américo Furtado de Oliveira, director of the Argentine office of the ILO, who pointed out that "this issue gained momentum thanks to women's movements around the world, which we have seen reflected in Argentina with movements such as Ni Una Menos” (Mot One Less). On this point, he added that "Argentina is an important partner of the ILO and a strategic actor in the United Nations, as it continues to demonstrate that it can be at the forefront and lead on issues of great social impact", according to information posted on the ILO website.
Education International Campaign
The adoption of Convention 190 was due mainly to the work of global unions, with Education International (EI) standing out with its #RatifyC190 campaign. On 25 November last year, the International Day for the Elimination of Violence against Women, Global Unions called on governments to urgently adopt ILO Convention No. 190 and Recommendation 206 on violence and harassment in the world of work.
The EI Executive Board, which met on November 2019, passed a resolution applauding the adoption of C190 and calling on all governments to take "steps to ratify C190 as a matter of urgency". The Executive Board resolution also encouraged all EI member organisations to actively campaign for the ratification of C190 at all levels and in all countries across the globe.

“What about Convention No. 190 in Tunisia? Eliminating Violence and Harassment in the World of Work”, by Emna Aouadi.