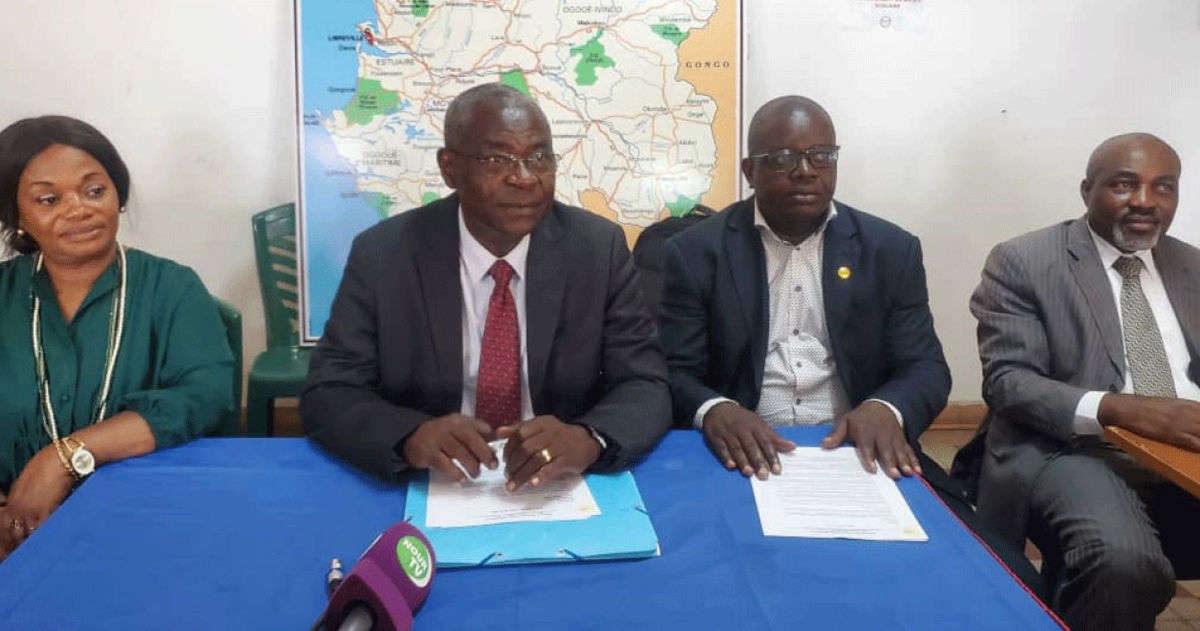 Launching its trade union activities at the start of the new school year, national education union, SENA (Syndicat de l’Education Nationale) welcomed the progress achieved last year through social dialogue and called on the government to continue with the talks in order to resolve the issues raised by the union that remain pending, to ensure a peaceful school year ahead.
On 14 September, SENA reviewed the work carried out over the past year before looking ahead to the actions to be carried out during the 2022-2023 school year.
Conditions for the resumption of classes
“SENA notes that the return to school for the 2022-2023 academic year, while effective, is proceeding with great slowness. This situation is due to the administration’s management model,” remarked SENA’s general secretary, Fridolin Mve Messa.
The union leader expressed regret that the appointments of the heads of schools and administrators, as well as decisions regarding staff, were announced well after the start of the administrative year, despite numerous reminders from his union, which advocates “rational and transparent human resource management”.
SENA reiterated its request to the government to see all these operations take place well before the start of the administrative year, “to avoid,” said Mve Messa, “the bungling and the wasting of time currently observed, not to mention the stress that this situation creates for teachers, administrative staff, pupils and their parents”.
Also on the subject of human resources management, SENA has asked the minister to issue professional cards to teaching staff to guarantee their mobility and support their social status.
The union leader also stressed that his organisation has denounced and condemned the abusive practices that continue to occur in the country’s schools, in breach of the instructions and measures laid down by the education minister. “Some heads of schools continue to engage in the illicit practices denounced, making enrolment conditional on the compulsory provision of reams of paper, toilet paper, the purchase of a personalised envelope at a cost of 1,000 (€1.5) CFA francs, while others continue to require the prior payment of fees ranging from 5,000 (€7.50) to 10,000 (€15) CFA francs in exchange for the right to enrol or re-enrol.”
SENA asked the education minister to take punitive measures against those heads of schools who persist with “such practices, which are akin to racketeering and theft”, described as “reprehensible practices” by Mve Messa.
The successes achieved by the SENA-CONASYSED coalition
Looking back on the trade union actions carried out during the past school year, the union leader found “a reason for pride and hope for a better tomorrow in the results achieved”.
He highlighted the fact that SENA has been able to consolidate its leadership within the framework of the coalition between SENA and CONASYSED (National Convention of Education Sector Trade Unions): “As the leading trade union force in the education sector and thanks to the experience acquired over decades, we have succeeded in obtaining the signature of the statement of conclusions following very tough negotiations with the government, under trying conditions for the members, who we would like to sincerely congratulate, here and now, for their tenacity, their commitment and the sacrifices they have made.
He added that as part of this coalition, trade unionists have been able to “score an invaluable victory” by securing:
Progress still to be made
“We will always maintain that the trade union struggle cannot be won in one round. On the contrary, it should be seen as an incremental policy and approach, one that will enable us to better face the many challenges that lie ahead. In accordance with this trade union principle, which forms the basis of the philosophy behind our actions, we should prioritise dialogue and permanent consultation with a view to settling labour disputes peacefully and amicably,” said Mve Messa.
For the 2022-2023 school year, SENA is therefore calling on the education minister to resume the negotiations between the government and the SENA/CONASYSED coalition in order to provide definitive answers to the issues still pending, such as:
SENA is also awaiting the government’s answers on the following points:
On the subject of school transport, SENA expressed its concern about the sustainability of this operation in view of the dilapidated and insufficient fleet of vehicles dedicated to school transport, and urged the government to significantly increase the number of buses in view of the school population to be transported, and to extend school transport to the interior of the country.
Finally, with regard to the partnership with the new ministers, SENA noted with satisfaction the willingness shown by the two authorities to make social dialogue more participatory through regular meetings with the social partners and their involvement in the work of the various commissions set up.
It was also noted that inclusive and participatory social dialogue is an international requirement that public authorities must integrate into their governance model. “It is not therefore a favour that would be granted to legally constituted trade unions,” the SENA leader stressed.
He went on to say that SENA intends to continue building the capacities of its members through training and awareness campaigns throughout the country. “The National Executive Board also needs to adopt policies to attract and retain young teachers through targeted actions.”
Finally, SENA called on the public authorities to take immediate account of the concerns raised in order to guarantee a peaceful school year. “We trust in the pragmatism and determination of the minister of education, who committed to transforming our school environment during his speech at the beginning of the school year” and “I invite all our members to mobilise for action-based trade unionism,” concluded Mve Messa