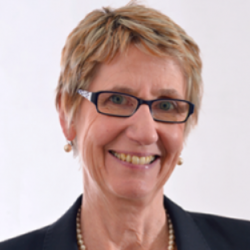 Susan Hopgood is both President of Education International (EI) and the Federal Secretary of the Australian Education Union (AEU).

Susan started her career teaching mathematics in secondary schools in Victoria, Australia. She joined what is now the AEU as a young teacher, and became an active member and union representative at the school, regional and state levels. She began working with the union in the position of women’s officer, a job she held until 1993.

Since then, Susan has held a number of positions in the education union, such as branch general secretary, AEU federal women’s officer, and deputy federal secretary. She was elected federal secretary of the AEU in 2006, the first woman to achieve that position.

In her work at EI, Susan is active at both international and regional levels. She was elected as an EI vice-president at the EI World Congress in Thailand, in 2001, and then re-elected in Brazil, in 2004, and in Berlin, Germany, in 2007. She was appointed as president by the Executive Board in 2009 when the then president, Thulas Nxesi, resigned to be become a South African Minister. In 2011, she was elected unopposed as president at the EI World Congress in South Africa, and re-elected in Canada in 2015 and Thailand in 2019.

Active at the regional level, Susan was elected vice-chairperson of EI’s Asia-Pacific Regional Committee in 2000, and was twice re-elected, in 2003 and 2006.

She has also been involved in the Council of Pacific Education, holding the position of vice-president from 1998 to 2006.