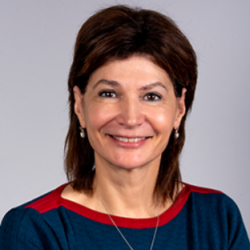 Lily Eskelsen García serves as vice president of Education International (EI) for North America and the Caribbean, pursuing a common course of action on issues like collective bargaining, raising student achievement, and adequate funding that resonate around the world.

Lily is also the president of the National Education Association, the nation’s largest labor union. Lily began her career in education as a school lunch lady and now leads a professional association of three million educators — she is the first Latina to lead the NEA and one of the country’s most influential Hispanic educators.

Prior to assuming the top post, Lily served two terms as NEA Vice President and Secretary-Treasurer. She became a vocal critic of the standardized testing movement and raised alarms on the outsize role that testing is playing in public education: taking over the time students spend in the classroom, being used as a weapon against their teachers, and distracting from real problem of inequality.

Her new role is an extension of her teaching days in Utah. She was named Utah Teacher of the Year in 1989 after nine years in the classroom. She also worked with homeless children and gifted children; as a mentor for student teachers; and as a peer assistance team leader at Orchard Elementary School in the suburbs of Salt Lake City.

In 1998 she attempted to put her 20 years of experience working with small children to practical use by becoming her party’s nominee for the U.S. Congress. The rookie effort didn’t work out but she made her mark: she was the first Hispanic to run for Congress in her state and earned 45 percent of the vote against the incumbent.

Lily is a sought after speaker and has keynoted hundreds of education events across the country, earning her recognition by Education World in their "Best Conference Speakers" edition. She also blogs at "Lily’s Blackboard" bringing a teacher’s voice to topical education issues. Her advice has been published in Parenting magazine and she has been featured on MSNBC, CNN en Español and as the noble opposition on Fox & Friends.

Lily believes in the sacred duty of all educators to be professionals and to care for the whole student - mind, body and character — no matter how students arrive and no matter their learning conditions, their home conditions or their health conditions. And she believes that professionalism carries the responsibility to take action, individually and collectively, to fight to make the promise of public education a reality and to prepare the whole and happy child to succeed in becoming a whole and happy adult.