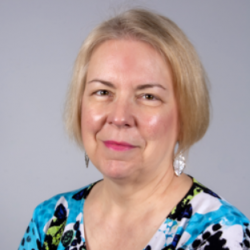 Dianne has worked in Saskatchewan secondary schools since 1977 and has been involved in teacher organization work for many years.  She served as President of her provincial organization, the Saskatchewan Teachers’ Federation, from 2007 to 2010.  She was elected to the Board of Directors of the Canadian Teachers’ Federation in 2007, and served as President of CTF from 2013-2015.  She now serves as Past-President.

Dianne was chair of the Host Committee for the 7th Educational International World Congress, held in Ottawa, Canada, in July, 2015, and was elected to the Executive Board of Education International at that same Congress.

Dianne has served on numerous committees locally, provincially, and nationally, including the Teachers’ Bargaining Committee for two rounds of provincial collective bargaining.  Dianne was also a board member for the McDowell Foundation for Research into Education from 2004 to 2007.

Dianne is married to Gerard.  They live in Saskatoon, Saskatchewan, Canada.