An interview with Marlis Tepe, president of the German education union (GEW).

What is your conclusion after several weeks of lockdown: how did education workers get through the closing of schools  - income-wise and also workwise?

Most teachers in Germany are state employees, they were paid all through, also teachers with permanent working contracts who are paid according to collective bargaining agreements. We also haven’t heard of problems for colleagues with fixed-term contracts. So, teachers come out alright in terms of income.

In kindergartens, however, there are plans for short time work and short time pay in some cases, that is what we fight presently. However, employees of municipal kindergartens are paid through.

For those who are working in further education and training, it is more difficult because they are paid by honoraria. We have achieved that they have access to social grants now. For the students, the time limit for the payment of grants will be extended by one term.

Lecturers who are teaching on contracts still work under precarious conditions. Dependent on where they work, they have different access to the varying short- term material support measures in the different federal states. This inequality is one of the shortcomings of our federal system.

How did teachers manage the challenge in terms of distant teaching methods?

That was more dramatic. During our meeting with all federal state education ministers on 12th of March, only Bavaria wanted to close schools. Consultation with virus experts then made the politicians change their position on the same evening and opt for closure on very short notice late on Friday 13th of March. Anticipating the closure, many teachers asked their students to take their books and papers home that Friday. 0thers went to school the following Monday and sent parcels to their pupils with the material they needed.

Changing to digital methods was a challenge. It was easier in schools which already had platforms for e-learning. However, many students only have mobile phones and could not manage their tasks without laptops or personal computers. Many schools and teachers have been very creative in recording and sending lessons and contacting their students, also by telephone. For us it became clear that there are quite some chances in digital learning, but there is still an urgent need for personal contact, specifically for the younger pupils who cannot read yet.

How did the students cope with this time of distant learning?

That varies in terms of their social background. In difficult circumstances with very narrow homes, alcohol abuse and violence, it was very hard for learners, according to their teachers‘ reports who sometimes had first insights in this situation. Children from poor homes were clearly disadvantaged. It became obvious that at the end of this crisis, we need more measures to compensate for this. As a union, we have demanded additional support for schools in socially disadvantaged areas long ago. Also, their teachers need less teaching duties and more time for social interaction.

Is there any gain for teachers from this period for their lessons when schools are re-opening in May?

Our colleagues have cooperated with their digital programmes in many schools, they shared their digital concepts and videos. Some are more aware now about the positive aspects of digital learning. Others discovered that some of their pupils who are normally difficult to motivate were even more interested in learning this way. As social restrictions and isolation applied to everyone, there was also more time for learning when nothing else happened.

How does the plan now for the gradual re-opening of schools look like, and how did GEW influence it?

Re-opening schools from 4th of May was a decision by the chancellor and the heads of the federal states. This date was important for those federal states who start their summer holidays early this year, that applies to those in the North and Berlin, also North Rhine-Westphalia. They wanted the elder students back even earlier to make sure that they finish the final examinations before the holidays begin. As a union, we tried to change the fact that so much attention is paid to the examinations; we argued that in all federal states the re-opening of schools needs time for preparation. Now the starting will be different from region to region. Regional representatives of GEW are part of the crisis management teams only in some of the federal states, in others they are not consulted at all. At the national level, the president of the committe of the education ministers of the 16 federal states in Germany has invited GEW and the teachers’ association VBE together with the federal parents’ representatives to give their expertise at a late stage.

What conditions should be met to protect teachers’ health when the schools are re-opening?

We think that each and every school needs a proper assessment of the working places in terms of the sanitary conditions and also a check if the necessary distance of 1,5 meters can be kept. Representative bodies of teachers in the schools should be consulted in these danger assessments: is there enough washing facilities, soap, disinfection liquid. School by school, they need to decide which age groups can come back first, who of the staff is ready for teaching and who belongs to a group with a higher risk of infection as defined by the experts. Those would be the ones to continue working from home. Schools also need to make a plan how to organise lessons with only half of the students present. This is very complex.

Do you think teachers and students need any protective equipment?

According to the standards of the ministry of labour published in April, they might have to wear masks on the corridors if it is impossible to keep the prescribed distance, for example during the breaks and each time they enter or leave the building. However, even masks can become a risk if not properly used. These considerations should be left to each and every individual school. From our point of view, it is problematic that in so many schools you don’t have committees responsible for safety and security at work. Long ago we criticised that safety and security at work has been neglected in public schools. Now the offices for public health will have to become active to check and give advice to the schools.

What does it mean to the teachers to organise their lessons like shifts?

They will have to prepare both ways: lessons for half of the students who are present, and tasks for those who are learning at home at the same time. It has to be decided what makes more sense: to have the one group in school for the first three hours of the morning and the other group for the last three hours, or to have them change shifts on a daily or weekly base. However, it will be quite a challenge to make a time table and coordinate that system with the presence of the colleagues. It also needs time for proper planning. Additionally, all these aspects have to be coordinated with school transport services.

What should be the conditions for examinations in schools now?

We think that there shouldn’t be examinations in schools this year because of the very unequal chances for preparing on the side of the students. Instead, they should get a final certificate according to their performance before the closing of schools, acknowledging what they have done so far – just as other countries in Europe do it. From our perspective, the decision to enforce examinations now is an inappropriate focus on those students who do the matric. It increases regional differences and does not pay attention to others.

How did and how does GEW support its members in this process?

We have developed a homepage which responds to many questions around the corona pandemic, and we have addressed politicians at all levels of government in Germany on their behalf. We even spoke to the ministers of labour and of finances to clarify the financial needs. We also approached the minister of economic cooperation and development, the World Bank and the International Monetary Fund. All human beings worldwide are affected by the coronavirus. This is also true for refugees: We advocate for relocation from camps where good sanitary conditions cannot be kept. Solidarity and human rights are international.

Note: this interview was carried out by Sigrid Thomsen. 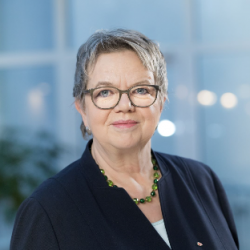 Marlis Tepe is Vice President of Education International (Europe) and has been president of Gewerkschaft Erziehung und Wissenschaft (GEW) and its 280.000 members since 2013. Before that she worked as a primary and secondary school teacher in the Federal State of Schleswig-Holstein. From 1995 through 2013 she was voluntary member of the state association’s GEW executive board and from 2006 through 2013 chairperson of the main staff council in Schleswig-Holstein. She is committed to inclusive teaching and practiced it since 1989. For more than 30 years she represented the GEW branch of Schleswig-Holstein in the GEW National Women’s Committee.