In June 2019, the ILO adopted Convention 190 concerning the elimination of violence and harassment in the world of work. Unions have long called for an instrument of this nature. We welcome the adoption of this Convention.

Convention No.190, together with Recommendation No. 206, which serves as a more detailed elaboration of the issues to help draft legislation and regulations, concerns the elimination of violence and harassment in the world of work.  It is the result of a process that lasted almost five years and is tangible evidence of the value and strength of social dialogue. It was drafted by tripartite constituents (governments, employers’ and workers’ organisations), which guarantees that the interests of all the three actors are considered.

The convention has entered into force 12 months after the date of its ratification by two countries: Uruguay and Fiji.

The Convention in detail

ILO C190 represents an important step towards the protection of female workers, converging into the broader fight for gender equality, unions in Tunisia together with Education International invite affiliates to push for its ratification by their States’ competent authorities.

This convention protects male and female workers, including employees, as defined in national laws and practices, as well as working persons regardless of their contractual status, persons working in training and apprenticeships, volunteers, job seekers, and individuals who exercise authority or have duties or responsibilities at work. The Convention applies to the public and private sectors, whether in the formal or informal economy, in urban or rural areas. It also applies to violence and harassment in the world of work that occurs in the context of work or is related to or arising from it. It also covers violence and harassment by third parties that have neither employment or a contractual relationship with an enterprise of authority.

Next steps in Tunisia

Tunisia has ratified most of the international conventions of the International Labour Organization as well as human rights Conventions of the United Nations and its bodies. Parliament has also adopted, in July 2017, Law No. 58 entitled:eliminating violence against women, which entered into force in on February, 2018. However, the government has not yet begun the procedures for ratification of Convention  No. 190.

For them to take this step, great effort and collective trade union actions will be required. The government needs to be urged and convinced  to speed up procedures protecting men and women workers and to counter violence and harassment that has increased within Tunisian society. This represents a threat to the society. It also has a negative impact on employment relations, production and the national economy.

What changes with the Convention?

The value of the Convention lies in its foundations and its scope to protect workers and persons in the world of work in all sectors. It also entails prevention. This consists of increasing the awareness of employers, workers and their representatives of workplace harassment and violence and to provide them with an action-oriented framework to identify, prevent and manage problems of harassment and violence at work.

That is why we should put great emphasizes on laws, regulations, and policies at national level. Main tools could be guidance, education, and training. That could be done through programmes of empowerment, awareness-raising campaigns, and education.

Public authorities have the duty to identify the sectors where workers are most exposed to risks of violence/harassment and take measures to protect them. Measures would include having workplace policy, assessments of  psychosocial risks, identification of hazards, and provision of information and training.

How to promote its ratification?

The importance of ratification of Convention No. 190 has proven more important during the period of covid-19 pandemic.

The cases of violence and harassment in the world of work have increased. One of the major impacts is the economic violence experienced by women consisting of unlawful closure of worksites, job suspension and the loss of employment, family unpaid care work, and others.

Unfortunately, the economic violence results in deepening poverty and compromises educational attainment and development opportunities for women and, even worse, it leads to physical violence.

In the context of the pandemic the Tunisian General Labour Union (UGTT)  in collaboration with education unions continue the work related to combatting violence at the work place by carrying out a series of awareness and orientation symposiums for trade union officials to address the gender dimensions of the COVID 19 outbreak.

This work has been done in collaboration with EI and other Global Union Federations.

The UGTT and the education unions agreed to use successful examples of the work they have done previously in order to conduct targeted campaigns on the gender dimensions of the COVID 19 pandemic. Also, to make use of the expertise built within the University of Primary Education throughdifferent training programmes aimed at addressing and combatting gender-based violence.

It rises on the conviction that educators have the power to change the prevailing culture and will contribute to broader change in society foster a culture based on human rights, freedoms dignity and equality.

“Prohibiting violence and harassment in the world of work”, by David Edwards. 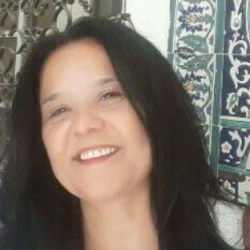 Emna Aouadi is the Deputy General secretary of UGTT’s federation of Basic Education (Union générale tunisienne du travail) and a member of the union’s National Office of Female workers. A basic education teacher, she also is a trainer on human and trade union rights and violence against women.