Currently, women and LGBTI people in Poland face a very difficult situation. However, it would be wrong and short-sighted to see attacks on women or LGBTI people as the problem of a single country or of one radically conservative government that seeks to establish an authoritarian regime. Poland is not an exception, but it is an example from which in-depth analysis and understanding can be gained to help stop the march of the well-known and widespread anti-gender movements - not only in my country, but also in other regions of the world.

Attacks on women and LGBTI rights

In November 2020, the right to abortion in Poland, which was already one of the most restrictive in Europe, was made even stricter. This was done without public consultations, nor through legislative actions in the Parliament, but through the decisions of several judges of the Constitutional Tribunal whose independence from executive and legislative powers was undermined by recent reforms[1]. Responding to a question from a group of ultra-Catholic Members of Parliament, the Tribunal stated that the anti-abortion law was contrary to the Constitution, which obliges the State to protect life.

The change of regulations was made at the height of the Covid-19 pandemic. The Government probably hoped the pandemic and related lockdowns would stop mass protests, but it did not. Thousands of peaceful demonstrations shook Poland for several weeks.

A few months earlier, local governments were encouraged to adopt resolutions against the promotion of the so-called "LGBTI ideology", establishing ‘LGBTI-free zones’, as they are commonly called. During the 2020 national election campaign, the Polish President stated that LGBTI people are not people, but an ideology. This statement received widespread coverage in the world's media.

One can ask, how, in a country that granted women the right to vote in 1918 and decriminalised homosexuality in 1932 - often long before other older democracies - we can have such violent attacks on the rights of women and LGBTI people.

The growing international anti-gender movement finds fertile ground in countries such as Poland, ruled by a nationalist ultra-Catholic right wing.

As Polish researchers Agnieszka Graff and Elżbieta Korolczuk, recently wrote in a book about this movement[2]: "Mass mobilization against gender is fed by religious sentiments and willingly refers to morality, but it should be analysed primarily in the context of the actions of the populist right wing, which is looking for an ideological and emotional basis to gain political hegemony. Analysis of anti-gender campaigns that appeared almost simultaneously in Poland and other countries – including Brazil, Germany, France, Italy and the USA – show that stories about the dangers posed by gender are not merely a distraction from real politics. Disputes over gender and sexuality are today the very heart of politics, understood both as a set of specific problems to be solved and a place of symbolic struggle, a space where differences are negotiated and defined. The gender war is not a marginal "cultural" controversy, but a space of key and often brutal struggles for power. (...) Mobilization against gender is a reaction, and partly also a form of opposition to neoliberalism, which conservatives describe in a slightly different language: as extreme individualism, consumerism and the unlimited power of the global financial elite”. It is an effective way of "mobilizing people previously uninterested in politics or excluded from it".

The narrative language of the anti-gender movement is also spreading. It views gender, sexual orientation and feminism as threats to traditional values and as leading to the destruction of the family. This movement also describes abortion for medical reasons as ‘euthanasia’ or ‘discrimination against the disabled’. Lastly, it calls defenders of democracy and tolerance ‘neo-Nazis’, ‘neo-Marxists’, or ‘communists’, which, in countries like Poland and in Europe in general that experienced the effects of both the Bolshevik and Nazi regimes, has a particular overtone.

Over several months, we have observed a new strategy of the supporters of the anti-gender movement, gathered in various organizations and associations, which consists of placing their activists in important State positions. In October 2020, one such activist became the Minister of Education and Science in Poland. The Government was not disturbed by his public speeches a few months before his appointment[3]:

"Let's protect families from this sort of degeneration, corruption, absolutely immoral conduct, let's protect ourselves from the LGBT ideology and let's stop listening to this nonsense about some human rights or some equality. These people aren't equal to normal people and let's end this discussion" –

The new Minister has just announced a revision of textbooks and curricula in order to remove content identified as referring to "gender and LGBTI ideology". He entrusted this task to another activist associated with the ultra-Catholic organisation Ordo Iuris[4], who is not an expert on education but a theologian. Earlier, contemporary sexuality education was removed from Polish schools, thus depriving millions of Polish students of their right to comprehensive sexuality education.

The textbook review is another attempt to limit the autonomy of teachers and limit the right to education. At the same time, universities are compelled to respect the right to proclaim views that have long been recognized within academia as contrary to science.

Over recent years, schools and education institutions have been facing constant criticism for not being patriotic enough, instilling dangerous views in children and spreading destructive ideologies. Lobbying by ultra-catholic groups, such as Ordo Iuris, led to the ban on allowing NGOs into schools without parental consent. As a result, a few parents are enough to torpedo an interesting equality project that a school may have proposed to implement in collaboration with an NGO. NGOs themselves have limited their activities in fear of reprisals that could lead to their closure.

In this context, teachers often feel that they are left alone, especially in small and rural communities. Nevertheless, they participated en masse, together with students, in protests against the ban on abortion and in defence of LGBTI people.

Local education authorities demanded lists of staff participating in the protests from school principals, and teachers identified as having participated in demonstrations were threatened with dismissal. The Polish Teachers' Union (ZNP), which is the object of constant attacks by the authorities, provides legal assistance to all members facing harassment and discrimination. ZNP publicized attempts to unlawfully exert pressure on school heads and published critiques of the activities of educational authorities.

In 2020, the ZNP contributed to the work of a parliamentary working group that aims to restore contemporary sexuality education within the curriculum. Unfortunately, the pandemic continues to hamper many union activities.

ZNP encourages teachers to defend democratic values and equality. Collective awakening and action is the only way out of this impasse. Teachers alone cannot be expected to bear the responsibility of repairing what has been destroyed by years of wild neoliberalism: solidarity, empathy, respect for human dignity and each other, responsibility for the environment, among others. It is important for all of us to realize that quality education is a common good and also a common cause, around which we should come together and mobilise.

The basis of high-quality education is mutual trust: parents trust in teachers, students in teachers, teachers in parents. It also relies on students and teachers feeling safe in their educational institution, regardless of their sexual orientation, religion, origin or gender identity. Our education system operates in a context where trust is constantly undermined and the sense of security of defenders of democracy and human rights is broken.

Trust, safety and a sense of collective purpose is what we need to restore in our education communities. This is what our union movement is committed to.

[1]The Constitutional Tribunal was examined twice by the Venice Commission. Also officially known as the European Commission for Democracy through Law, the Venice Commission is an advisory body of the Council of Europe, composed of independent experts in the field of constitutional law. In its 2017 Opinion on Poland, the Commission expressed strong concerns over the reform initiated by the Government at that time. This reform "enabled the legislative and executive powers to interfere in a severe and extensive manner in the administration of justice” and thereby “posed a grave threat to the judicial independence” (§ 129). Successive changes in 2019 made the Tribunal more dependent on the political supervision of the ruling party.

[4]Ordo Iuris, the Foundation Institute for Legal Culture, was established in 2013 to "research the legal culture and spiritual heritage in which Polish culture is rooted, and to promote them in public life and the legal system". It is affiliated with the Brazilian NGO Tradition, Family and Property (TFP) operating in many countries around the world and identified as one of the most active pseudo-catholic movements by the French commission of inquiry into sects.In 2018, its budget amounted to more than 1.03 million euros, coming entirely from donations. 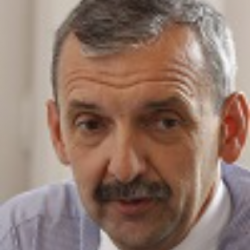 Slawomir Broniarz is the President of the Polish Teachers’ Trade Union (ZNP).  Since 2011, Slawomir is a member of the Executive Board of Education International.