“Lebanon is suffering from its worst economic crisis in 30 years. Across the country, tens of thousands of people have lost their jobs and millions more struggle to buy necessities – all amid the continuing coronavirus pandemic” [1].

The severe economic crisis the country was experiencing prior to the outbreak is reflected in the accumulated debt, which had reached $90bn - or 170 percent of GDP - by 2020,making it one of the most indebted countries in the world. This caused an unprecedented devaluation of the Lebanese lira, which had devastating consequences on consumers’ purchasing power as Lebanon relies heavily on imports for the goods it consumes. Compared with 2019, basic food items’ cost has increased fivefold on average.

Tens of thousands of Lebanese have lost their jobs and according to the Ministry of Social Affairs, 70% of the population requires financial support after the economic crisis was exacerbated by the pandemic. The health emergency and its socio-economic consequences have exacerbated unequal income distribution in the country, disparities across regions and existing difficulties to generate inclusive growth. The economic crisis has also impacted the provision of public services including education. Even before the pandemic, the Syrian crisis, and the large influx of refugees that resulted from it, compounded pre-existing deficits and challenges in the education sector.

Despite the government’s attempts to support businesses and households though the suspension of tax payments and cash assistance programmes, people do not feel that these support measures go far enough. Demonstrations that started in October 2019 - to protest to charge users a USD 6 fee for the use of WhatsApp and other similar apps - have continued throughout the pandemic.

EI member organisations in Lebanon support the legitimate demands of hundreds of thousands of activists calling for radical change of a political system that is said to be characterized by corruption, confessionalism and clientelism. We call for the government to show political will and make every effort to stop the endless economic crisis plaguing Lebanon. We reject measures such as the imposition of taxes on those with limited income, particularly employees in the public sector and call for alternative solutions.

Our union movement believes that there is a strategic way to respond to the crisis: cancelling Lebanon’s national debt in order to be able to support education and other public sectors. Any debt cancellation should be free from conditionality and human rights should be at the center of any debt restructuring process.

Finally, debt cancellation should go along with tax justice and domestic financial mobilization to better invest in public education systems, including teachers' salaries and professional development.

[1] Infographic: How much do basic necessities cost in Lebanon? | Infographic News | Al Jazeera

“Investing in education: a must for post-pandemic recovery and SDG progress”, by Dennis Sinyolo. 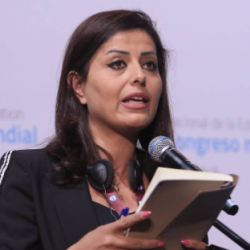 Manal Hdaife is a school principal in a public primary school in Lebanon. She is a regional branch leader of the Public Primary Schools Teachers League in Lebanon (PPSTLL) and a member of Education International Arab Countries Cross-Regional Structure’s Committee.